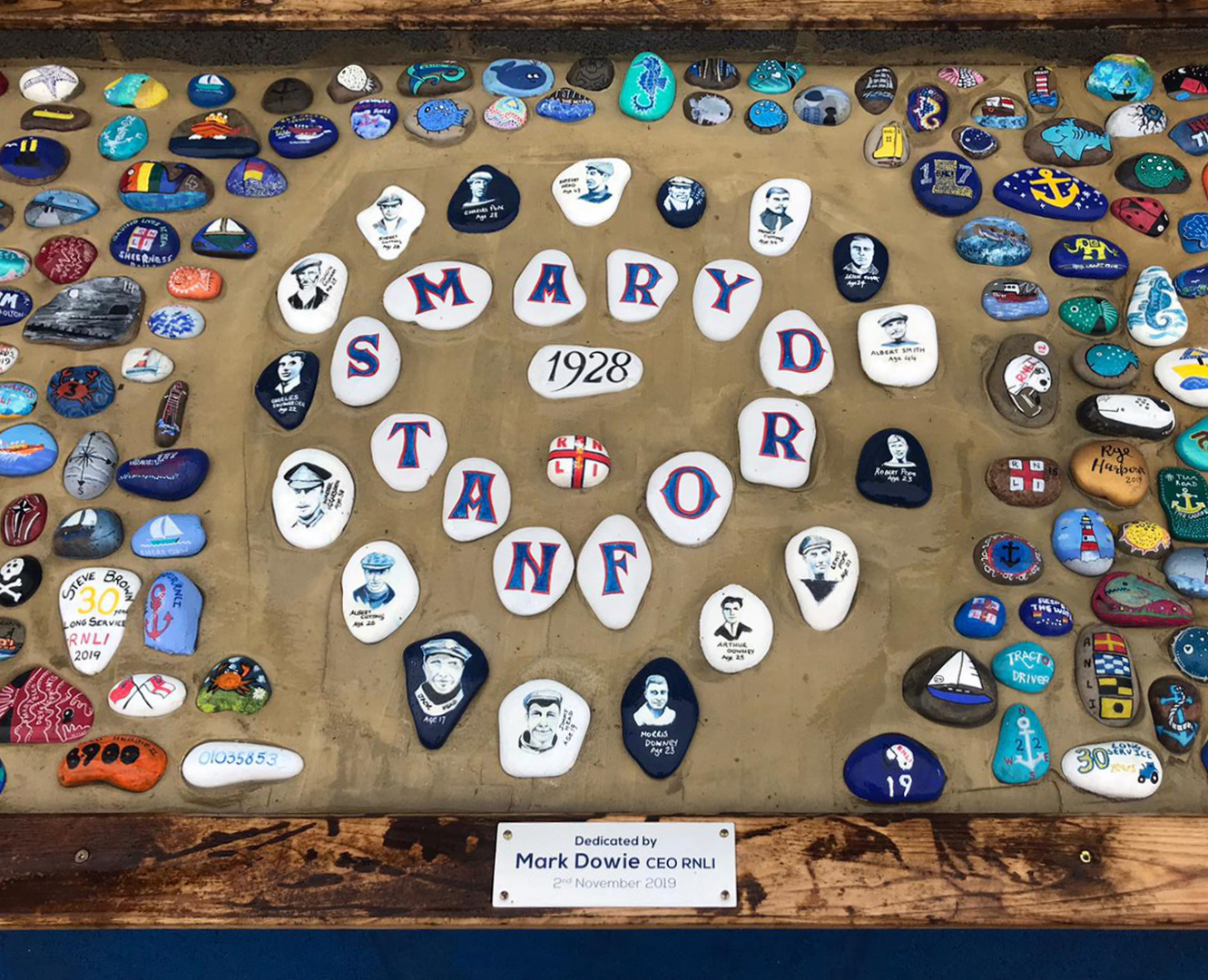 On a very wet and windy Saturday 2nd November, a memorial service was held in honour of the crew of the Rye Harbour lifeboat – the Mary Stanford.

On 15th November 1928 the seventeen crew members of the Mary Stanford gave their lives trying to save the stricken ship the SS Alice from Riga from trouble during a gale. This tragedy killed nearly all the male fishermen of Rye Village at the time and took more than one man from many families, including 17 & 19 year old brothers and their father from the Head family.

The project to create the memorial to honour the lost lives took eleven months to complete and was born from an idea by KT Bruce- the lifeboat press officer.

There was a huge community effort to create the memorial. Long Rake Spar donated Scottish Cobbles, which were to be painted for the memorial. Geri Cottingham, a local artist, painstakingly painted the seventeen stunning portraits of the gallant crew that form the centrepiece of the memorial. John Mills, a craftsman from the village painted the letters spelling out ‘Mary Stanford’. That, plus some thirty workshops later including Brownies, Guides, Cubs, the museum in Rye, the crew at the lifeboat station, villagers and local schoolchildren, the nine hundred pebbles were ready to be cemented into concrete.

Ian Leroy-Lewis, a local plasterer and bricklayer, spent many hours creating the concrete block raised bed. The weather decided to be as awkward as possible during the construction of the memorial with October in the harbour being the wettest month of the year. However, everyone soldiered on until it was completed.

The memorial service began with KT explaining the project in full. This was followed by Mark Dowie, CEO RNLI, dedicating the memorial. It was very emotional as he read out the seventeen names of the crew who lost their lives. Martin Bruce, Rye Harbour chairman, had written a shanty telling the Mary Stanford story to honour the crew. His group, the Round Rye Bay singers then performed it for the first time. It was haunting, with many listeners moved to tears. Our own Depot Manager at Rye, David Locke attended the memorial service.

KT Bruce summed it all up: “Eleven months of hard work and planning bore fruit today as the memorial was dedicated. I would like to thank my husband Martin for his support and coping with moving, washing and storing nine hundred pebbles in our home. I have had such fun and met some wonderful people on this journey. The comments from those who have seen it have been heart-warming and it is wonderful to think that this is now a permanent fixture in our village to pay tribute to the crew of the Mary Stanford.”

For anyone interested, donations to support the amazing work that RNLI do can be made HERE.