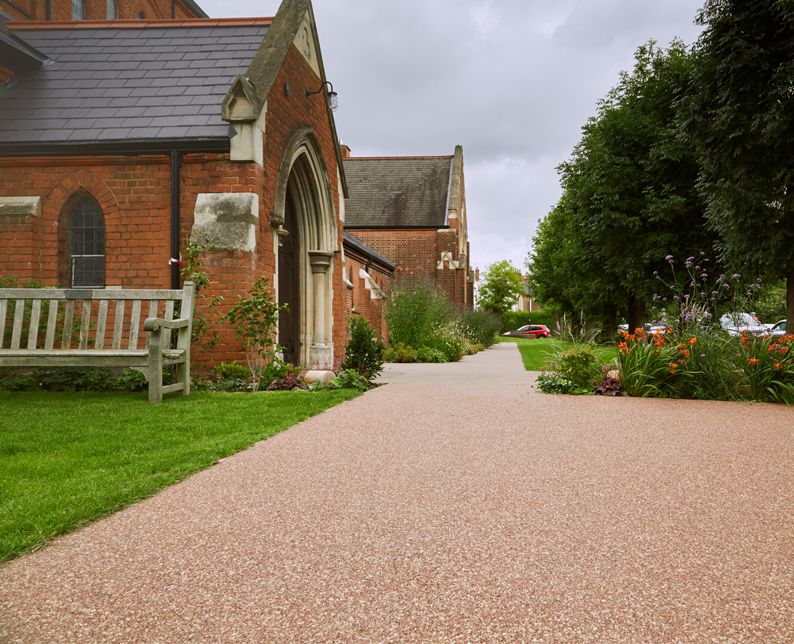 Since the parish of St Thomas with St Stephen was formed in 2006 both buildings have undergone major redevelopment to bring them into the 21st century.

St Thomas’ obtained its position of a legally established, independent church in 1903. Today it is a lively Anglican church serving Streatham Hill, Clapham Park and Balham.

As part of the hard landscaping aspect of the redevelopment, SureSet were contracted by RR Landscape Solutions in August 2015 to install resin bound footpaths and car parking spaces.

Natural hardwearing stones were required for the resin bound surfacing and Long Rake Spar were chosen as the aggregate supplier.

Material from Long Rake’s extensive Grantex range was chosen to complement the red brick Church and a total of 282m² of SureSet’s resin bound paving in Tuscan Barley Beach was laid onto asphalt base, up to wooden edging.

Phase 1 was laid in September 2015 and the project completed with the installation of Phase 2 in October 2016.

Following the £2m redevelopment project, and 114 years after it first opened, St Thomas’ church was officially blessed and reopened by the Bishop of Southwark on 27 September 2015.

The redevelopment has created new facilities for the Church and community the landscaping around the church has completely transformed the look.

In July 2017 NC Architects and Dick Lovett Aston Martin won the LABC award for ‘Best Large Commercial Building’ in the West of England.