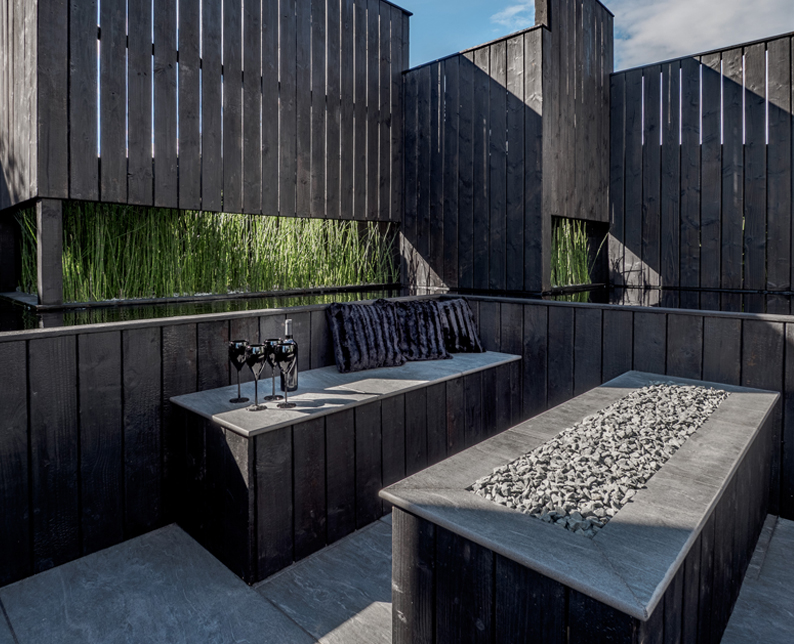 Each year the Southport Flower Show grows in prestige and 2017 was no exception with a stunning selection of show gardens, floral marquees and stalls available for visitors to the North West.

Southport’s gardens featured a variety of styles from a range of designers, but the entry by C & W Berry’s ‘Kuro’ garden once again stole the show. Designed and constructed by the team at Kirman Designs, with Black Basalt donated by Long Rake Spar, the garden was composed of dark materials and hard angular aesthetics with blocks of green planting.

Visitors were transported into another world through apertures on the large black cube, revealing delicately neutral woodland planting in a room of mirrors. Japanese Forest Grass, Anemone, Astrantia, Ostrich Fern and Himalayan Birch form part of the extensive plant library.

Entitled Kuro is ‘black’ Japanese and this garden connotes Japanese culture through the dominant use of shou sugi ban timber; an ancient technique of preserving wood by scorching the surface before coating it in natural oils to reveal the grain.

Andy Kirman, Garden designer commented: “This Garden was a brave statement, but it has paid off in the end. Sometimes a split of opinion is a good thing as it creates conversation”.

The show garden aims to inspire visitors and introduce them to the vast possibilities of Berry’s products. The Garden features porcelain paving from Global Stone, bespoke fencing from Denbigh Timber, Aggregate from Long Rake Spar, and lighting from Ansell. Behind the scenes, the tools and equipment were also provided by C & W Berry.